Yet again a jetliner has crashed into the sea, this time with the loss of 162 passengers and crew. How can this happen; and â since flying is supposed to be so safe â how big is the risk? 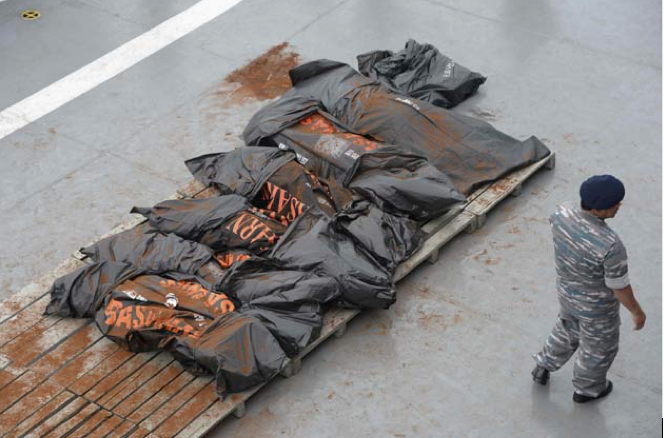 The easy part to answer is the risk. It is almost infinitesimal. Commercial jets have been getting safer and safer for fifty years (although there was a blip in the 1980s due to terrorism). Nowadays the odds of being killed on a flight with reputable airlines is about one in twenty million. Even with the worst performing carriers you could expect to take a million and a half flights before being involved in any event in which somebody was killed. The global fatality rate about 1,000 a year, compared to over 1,000,000 deaths on the road, so mile for mile or minute for minute flying is much safer than driving. But the aviation industry canât rest on its laurels. Every crash makes headlines so with passenger numbers rising five per cent each year the safety factor has to grow by five per cent simply to keep pace.

Hence the AirAsia disaster is not just a terrible tragedy for those involved, but a huge worry for the industry in general.

The safety authorities â like Britainâs Air Accident Investigation Branch â are usually tight-lipped at times like these. Hasty inquiries can miss key facts and jump to unjustified conclusions, apart from which official verdicts can ruin careers and prompt multi-million dollar law suits. Accordingly they try to stick to facts and avoid public speculation, usually taking months and sometimes years before they issue their reports.

That doesnât stop the media, of course, which respond to public anxiety and to the human impulse to make sense of uncertainty. This can lead to wild conjecture in the early days but usually reporting converges over time so that there are few surprises by the time the official reports are published.

Initial radar tracks indicate the plane gained altitude at an alarming rate. If this is borne out by data from the flight recorder it might explain the crash, perhaps through jammed control surfaces, with such ascent creating catastrophic damage to the airframe, or simply causing loss of forward speed.

And yet that doesnât necessarily mean that the aircrew climbed too steeply to avoid the storm. The theory sounds credible because it was just such pilot error that caused the loss of AF447, the Air France Airbus that disappeared into the Atlantic in 2009. One pilotâs relentless anxiety to climb slowed the plane so much that it stalled and fell out of the sky. There is, in my view, an intrinsic risk in the Airbus design that contributed to the A447 tragedy â a design that makes it harder for one pilot to see what the other one is doing so the error wasnât spotted by the flying officerâs colleagues until it was too late â but the Air France crash was so seminal that every airline beefed up training and every commercial pilot in the world would be allergic to the danger. It would be both astonishing and scandalous if AirAsiaâs crew remained somehow unenlightened.

What seems more plausible is that the storm itself caused the aircraft to malfunction. Thunderstorms can generate enormous updraft, although itâs hard to imagine a  current so sustained that could lift a 70-tonne fully-laden airliner for more than a few seconds.

Big jets like an Airbus are remarkably robust. They can be hit by lightening, buffeted by turbulence, baked by sun on the tarmac and frozen at high altitude. Their engines are so reliable they almost never fail. They can cope with huge variations in air temperature, rain, snow and with rare exceptions even ingesting foreign object such as after bird strikes.

At least one weather event has proved dangerous â one that is hard to predict and largely invisible to radar.

When moist air rises rapidly above tropical sea, supercooled droplets of water can freeze when they encounter the cold surfaces of a high-flying airframe. This is rarely a problem because small ice particles melt on impact with the heated windscreen and vaporise in the engines. But sometimes convection storms can cause moisture to freeze so rapidly it forms crystals, and these so-called convective crystals have been known to cause damage to planes and temporary power loss.

Each engine on an A320-200 Airbus like AirAsiaâs QZ8501 sucks in around a ton of air each second. A very heavy concentration of ice crystals could conceivably overcome the enormous momentum of the turbines and kill off forward thrust. The pilots would than have to glide the aircraft while they fought to revive the engines. They would have ample time to do so. A wide-bodied jet can glide about eight miles for every 1,000 feet of altitude. Famously, in 1982 a British Airways jumbo flew for 13 minutes without power after flying through volcanic ash. It was still at 13,000 feet when first one and then the other engines came back on line. If convective crystals had done for QZ8501 what volcanic ash had done for BA09 two decades earlier then, depending on the weather, the Airbus should have had a range of at least 50 or 60 miles.

If the engines couldnât be re-started then Captain Iriyanto would have had no option but to try landing in the sea. That would be hard enough in tranquil conditions on flat-calm water, like the ditching of US Airways flight 1549 in the Hudson six years ago. But QZ8501 would have come down in tumultuous turbulence into mountainous waves. At more than 70 tonnes and 37-metres long it would not have stood a chance.

The idea of a pancake landing in heavy seas would account for the fact that large pieces of the fuselage appear to be intact at that bodies have been found floating on the surface. Had the aircraft fallen vertically, as some reports suggest, it would impacted the water as though hitting a concrete wall. 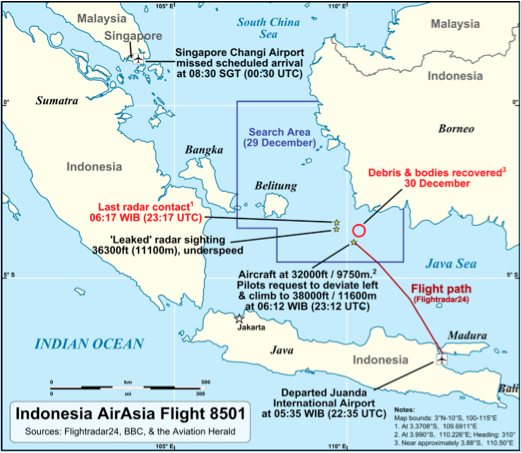 On the other hand an attempted landing assumes that the pilots had control. Why in that case was there no Mayday call? Why was the crash site so close to where the last radio contact was made, suggesting the Airbus really had dropped rapidly? This brings us back to those reports that the plane rose more like a fighter plane that a commercial airliner, perhaps caught in freak updrafts and downdrafts which threw it around the sky and then hurled it into the Java Sea.

We will know the answers soon. Unlike Air Malaysiaâs MH370, still missing in the southern Indian Ocean, the AirAsia wreckage is in water shallow enough even for recreational divers. Only foul weather, with 4 metre waves, strong currents and poor visibility, has been frustrating efforts to locate and recover the flight recorders located near the tail. Horrifying though the crash has been, it will soon yield its secrets and, though of little consolation to those who have been bereaved, it will contribute to make flying even safer than it is already.