After Suzy, the questions for our law

Itâs more than 30 years since the Suzy Lamplugh case first featured on âCrimewatchâ. Now Nick Ross asks if itâs time the public were less reliant on the police.

There is fascination about a crime like the disappearance of Suzy Lamplugh. Perhaps itâs a very human part of our concern for others and our instinct for self-preservation, or perhaps it borders on the ghoulish. But for me the hunt for her body in Sutton Coldfield invokes two other emotions: remarkable memories of her family, and a gnawing worry that shocking crimes like this distract us from being more thoughtful about policing and crime in general.

We had started <Crimewatch> in 1984, two years before Suzy went missing. BBC bosses thought they had commissioned a run of three public service appeals to pad out the summer schedules, but Crimewatch was an unexpected hit. Long before the age of X-Factor this was a show where viewers could influence the outcome. Whatâs more, with crime then rampant (older people forget how bad it was) it was a subject everyone could feel engaged with.

But the disappearance of Suzy Lamplugh was special. It evoked a sense of premeditated evil with the added frisson that she might be being held alive, plus the âit-might-happen-to-usâ disquiet that an estate agent could be abducted by a potential customer. There was even a blackly comic side, that the client had given his name as Mr Kipper. But much more than that. Suzy Lamplugh had three qualities that, rightly or wrongly (and frankly, wrongly) made the story sensational: she was female, she was pretty, she was middle-class. 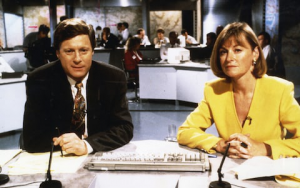 Challenges: Nick Ross, with Sue Cook, his co-presenter on the BBCâs Crimewatch, which highlighted the Lamplugh case in 1985

An integral part of Crimewatch was that we re-enacted scenes in the hope of finding witnesses or provoking informants to call in. For reasons of accuracy, but also courtesy, we would often show these reconstructions in advance to the victims or their families, and, as you might imagine, the viewing could be a harrowing affair. I canât recall the details of our first appeal for Suzy – this was more than thirty years ago and I canât even remember if Cannanâs name emerged from that first appeal – but I was struck by the demeanour of Suzyâs parents. Some victims are bitter, some insist the offender wonât win and are determined to shrug off their horrible experience, and some set out to create good from evil. Paul and Diana must have been crushed with anxiety but they made the best they could of it. They set up the Suzy Lamplugh Trust and, while still no news emerged of what had happened to their daughter, for the next seventeen years they poured all their spare energies into it until, sadly, Diana was diagnosed with early onset dementia.

By then I had experienced murder close to home myself. In my case it was a colleague, not a close family member, and so, while Jill Dandoâs death in 1999 was emotionally draining for me and all the team, it was a long remove from what Paul and Diana were going through. Nonetheless, like them I was determined not to be dragged down by anger and vengeance. Yes, of course I was anxious to know who the killer was, but from years working to catch offenders I knew that even an arrest and conviction could never assuage the loss. The idea of closure is just a clichÃ© â the pain of losing someone close doesnât go away because someone gets the blame. By then I also come to realise a broader truth about crime, that we could never arrest our way out of the problem; there had to be a smarter way. Jillâs death proved to be a catalyst. I had wanted to establish a new approach to crime, but now I also wanted to create a lasting memorial to her. Partly at the prompting of John Stevens, then Met Commissioner, the two ambitions merged into one.

The Jill Dando Institute was created by public subscription â supermarket tills offered forget- me-not badges in memory of Jill – and it has since grown into an entire department at UCL and one of the worldâs largest academic centres devoted to cutting crime. It was genuinely original, a truly multidisciplinary approach with a task I described as, âexamining the chains of events that lead to crime, to find and cut the weakest linkâ. The term I coined for the new discipline was Crime Science.

I had once thought the weakest link was the offender. In other words, if we caught more people weâd all be safer. But it turns out people are surprisingly hard to change. It was fine to lock up the thief but far more effective to lock the car, or the front door; or in todayâs world, to put passwords on our laptops or search baggage at the airport. Whatâs more, to my surprise, evidence mounted that if you designed out the temptation and the opportunity to commit offences, not all crime was displaced. Most of it just stopped, or, better still, you created a halo effect. The proof that we can conquer crime is crystal clear. Itâs what ordinary citizens say is their experience: a huge and consistent quarter-century decline in being a casualty of crime from the mid 1990s onwards. It was achieved largely by designing better products, services and built environments. Whatâs more, international victim surveys, along with hospital and other records, show it happened not just here in Britain but around the world. Even more surprisingly, it happened everywhere regardless of how tough or liberal criminal sanctions were.

Of course crime is illegal and so hard to measure, with only half what we experience reported to police, including violence. That makes police statistics rather flaky, which is why listening to victims themselves is so important. But even if we take police figures at face value, itâs clear that crime, like disease, is a multitude of sins. Some is still falling (when did you last hear of safe-breaking?), much is intractable, while some (as with knife crime) seems to have been on the rise. Meanwhile calls on the police service are expanding hugely as more of us report intimate offences like sex crime, unacceptable behaviour like racism, or political priorities such as modern slavery. To make matters worse, other helping agencies are stretched and the police are always everyoneâs last port of call.

Which begs the question: are we using our police to focus on the most important things? 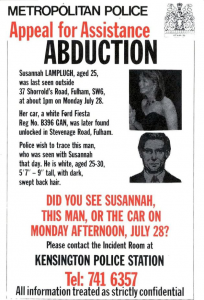 No one is suggesting that a case like Suzy Lamplughâs shouldnât be investigated. Given fears of an abduction it was rightly a matter of extreme urgency, especially while there were hopes she was alive. And it must surely remain a high priority so long as there were fears the offender would strike again. But if we want kidnapping and homicide to have a high priority, what are we prepared to concede is low priority? This is the question Sara Thornton bravely raised this week. Sara now heads the National Police Chiefs Council, and I declare an interest: I sit on one of her advisory boards. Given huge reduction in police funding and the number of sworn officers, what do we want from the resources they have left? Can police be expected to investigate misogyny, or even minor theft? If so, what will we give up instead: investigating shoplifting, mugging, domestic violence? Sara Thornton was daring enough to question the value of historical investigations – especially those where the suspect is now dead, or perhaps, as in the Suzy Lamplugh case, where the prime suspect is already locked away in prison.

These are tough questions. As a society we have shied away from them but they wonât go away, and itâs good that Cressida Dick, the Met Commissioner has now joined Sara to encourage adebate.

I would go further. Where should the balance lie between securing justice for what happened yesterday and devoting resources to heading off crime tomorrow? Indeed should police conduct any investigations at all? For a long time they themselves didnât think they should. The founders of modern policing were adamant that their role was to prevent crime not detect it. In any case there are other professionals, some better qualified to do investigations, and diversity is usually a good thing. This is especially true as crime migrates from physical, geographically-located offences like car crime to the virtual world and fraud where the police have precious few skills. Incidentally, in my experience even journalists are better at keeping secrets than many detectives.

In any case, crime detection owes much less to individual brilliance, as in the Sherlock Holmes approach, than to great teamwork, generous resources, seamless communication, clever protocols, good IT – and chance. We instinctively overrate conspiracy theories and underrate the influence of chance. But most crime is partly or wholly opportunist, a fact which is so unsettling that writers of crime fiction tend to shy away from it. Thrillers require a satisfying narrative, a plot that inevitably leads you to whodunnit. But in the real world of crime detection, things are much messier. Sometimes the crucial clue just falls into place, sometimes it is frustratingly elusive, and sometimes the mystery is impossible to solve.

Perhaps we need to ask even more disconcerting questions, including whether we as citizens should be less reliant on the police. For centuries it was the duty of everyone to solve crimes for themselves, to raise hue and cry, bring the suspect to justice and sometimes even pay the legal costs. The introduction of policing changed all that but maybe the pendulum has swung too far, leaving too much to the State and too little responsibility with us. The idea of taking the law into our own hands has become disparaged. Nowadays we tend to think of vigilantes as dangerous villains. But as society become richer, there is more to steal (and counterintuitively, crime tends to rise with wealth not poverty). Assuming the world continues in general to prosper then, inevitably, unless we all want to pay a lot more tax, we will be able to rely less and less on the thin blue line.

These big questions are so rarely posed because we are naturally drawn to the dramatic, and especially the most striking – like the case of Suzy Lamplugh. But just as her parents strove so hard to bring forth good from evil, maybe we should think more about the challenge posed by Sara Thornton. Whatever the results of the dig in Sutton Coldfield, we are left with big unanswered questions: what are our own responsibilities and civic duties, and how to balance the resources we have to make us all as safe as possible.