A confection by the Mail on Sunday 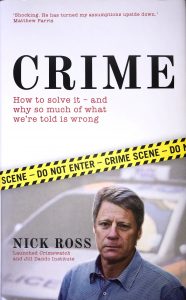 Celebrity and crime make good copy for the tabloids. So my book on Crime: how to solve it and why so much of what weâre told is wrongÂ was an attractive proposition for the Mail on Sunday. They bought serialisation rights, and they got their moneyâs worth. The response from readers was overwhelmingly positive. But when the paper asked for more weeks for its exclusive, and was turned down, it decided to make mischief. And sex was the most salacious target.

Much to the embarrassment of the journalist who had been faithfully editing extracts from book, his colleagues were tasked with keeping the Mailâs exclusive in the headlines by concocting a story of their own. It turned into what one publisher described as one of the greatest ever betrayals of serialisation rights – and it worked. Their headlines and their copy did all they could to make it sound as though I was a ignorant misogynist – and provoked a firestorm.

They took research I reported accurately:

Half of women who had penetrative sex unwillingly do not think they were raped and this proportion rises strongly when the assault involves a boyfriend, or if the woman is drunk or high on drugs: they led him on, they went too far, it wasnât forcible, they didnât make themselves clear â¦For them rape isnât always rape.

But the headlines and the opening text suggested that I personally believed rape isnât always rape. They added colour with other highly selective quotes – and found suitable women to lambast me. I was abroad at the time and so in no great position to respond, but in any case it burned so quickly almost anything I said would pour petrol on the flames. In the week that followed my reputation plunged from ânational treasureâ to âmost hated man in Britainâ.

With the internet ablaze with scorn and angry denunciations I trended to the top in UK social media.Predictably I was vilified by attention-seeking politicians like Diane Abbott but also by supposed liberals like Brian Paddick. And to my dismay other newspapers laid in with almost equally hysterical attacks.

A Sun columnist sneeredit was no good using the âtaken out of context card: why do middle-aged men, who will never be raped, even go there?âThe Sunday Times sent a Glenda-Slagg columnist to do a unadulterated hatchet job on me, several BBC local radio stations joined in (some were sympathetic, one was downright rude) and, perhaps most hypocritical of all, The Guardian jumped onto the bandwagon, whipping up a frenzy of disdain (led, incidentally, by Martin Robbins, a contributor who calls himself a science writer and claims to revile the Mail but who gleefully embraced their cherry-picked quotes). Only The Daily Telegraph conceded the story was concocted.

I freely confess that, having never been subject to such a wall of malice and derision, I handled it ineptly.

Thankfully a lot of newspaper readers saw through the smoke for themselves, posting supportive comments: âThe headline does the article a massive disserviceâ;âquestions like this need to be askedâ; âtypical, a journalist criticises media coverage of crime, and the media turn on himâ¦â.

And when I was able to speak to my critics, even the fiercest were much more measured, and even kind. One rape victim who wrote to me in a fury was entirely reasonable when I wrote back, apologising for her language and saying she had only gone on what she read in someoneâs blog. As we will come to in a moment, my fiercest critic who was headlined in the Mail on Sunday and who lambasted me in newspapers and on the BBC, completely changed her mind once sheâd actually read the book.

Above all, I was hugely heartened to get support from the women who matter most in this debate: rape survivors. Some said even they were frightened to tell the truth because accounts from victims tend to be reviled unless they conform to a politically-correct view. For example, this email came from a woman who deeply resents âthe madnessâ and âthe rantsâ that drown out voices like her own:

âI was raped twice in my teens. Neither were traumatic experiences. I didnât feel great about myself afterwards but I put myself in situations where there would certainly have been confusion/ambiguity on the manâs part in my desires. It was to do with my generally low self-esteem at the time, but that was my problem, and not theirsâ

You might say, so what? A response like this is typical of what women are expected to put up with. Alternatively, hers might be written off as a minority view; one can always find people to endorse almost any proposition. But thatâs the point! Victims refuse to submit to a stereotype. We might all yearn to address the lack of self-esteem which led her to think like this, but voices like hers must not be ignored.

Another woman, who was forcibly raped by a man she knew well, emailed:

âIt sits there in my memory, and rears up and bites me when I least expect itâ¦ but the act did not blight my life, leave me traumatised [or] afraid of men. Nick is right. Tell him so please, and long may he continue to say what he thinks. I have rarely admired a journalist more.â

âIn company with most people Iâm getting irate about this story. Iâm a victim myself and I certainly see the variations between what I experienced and what other victims in other situations might experience. It is a great shame we canât talk seriously about the very real problem of rape because any comment that isnât baying for the blood of all offenders everywhere is screamed down. The vitriol makes sensible discussion impossible.â

But most importantly, the woman whose front-page attacks on me in the Mail on Sunday gave the paperâs story credence, changed her mind.

Jo Wood is someone I admired: a former magistrate and science researcher who runs Merseysideâs Rape & Sexual Abuse (RASA) Centre and was awarded an MBE for her work with rape victims. In 2011 she was named Cheshire Woman of the Year.

Soon after the row exploded she downloaded my bookon Kindle, and read what I actually said. To my great relief, and to her great credit, she wrote to me to tell me sheâd been set up by the Mail on Sunday:

âThe book is an extensive study on crime and the causes of crime and has very few references to rape. The excerpts published in the Mail on Sunday have in the main been taken out of context and quoted accordingly.

All those responses made by us and others have been made on the basis of âsound biteâ quotes which when taken in context can actually read quite differently.â

She went through each of the phrases for which I was derided, and, having seen the context in which they actually appear in the book, she found no fault with any one of them. For example:

And so it goes on. She concluded:

âMaybe they should think about who is fast becoming the victim here – and without even holding a trial. Having read the full version I am satisfied that there is no intention to criticise victims of rape and that the comments made, when read in context actually strengthen the arguments for sexual violence crimes to be treated with the empathy and respect that victims demand.â

Joâs conclusion was about as direct a riposte as anyone could give to the howls of outrage on social media and from so many newspapers :

âI would seriously suggest anyone who still supports the furore that has broken out – takes time out to READ THE BOOK.â

There was a curious postscript to this.

I asked Geordie Greig, then the Mail on Sundayâs editor, for a right of reply and, perhaps sensing that they had overstepped the mark, he agreed. But there were conditions. He wanted Jo Woodâs repudiation to go at the end, not highlighted at the start. Reluctantly I agreed. And true to his word he ran my response the following weekâ¦.

It was set at the bottom right-hand side of a double-page spread with another concocted story attacking me again, this time citing another broadcaster: âFern Britton hits back at Crimewatch founder’s bookâ.Fern had not read the book and, so far as I know, has no criticisms of my views.

Geordie knows how to sell newspapers, and was subsequently promoted to editor of the daily paper as well as the Sunday edition. But not, I think, for his integrity – or, come to that, his attitudes to women speaking out.

You might have thought it could hardly get worse. It did.

I was invited to the Hay Literary Festival – one of the most important cultural gatherings in the UK – and drew a large and friendly crowd. But I hadnât learned my lesson.

One of the fundamental lessons of the book is that it is trite to think that crime is caused by criminals, and no more useful than to say that driving is caused by motorists. A countryâs experience of crime is not dictated by the birth-rate of evil people, so much as the extent to which fewer or more of us get tempted to do wrong. Take a way the shop counter, you get shoplifting. Use chip and PIN, and card crime declines.

As one of several illustrations of how decent folk can find themselves sucked into being bad,I quoted research which showed how, in certain circumstances, ordinary people can be persuaded to look at pornography, even though they had not been seeking it and felt no interest in it. They did so out of simple human inquisitiveness, like turning to glimpse an accident on the opposite side of a motorway. I told the audience that on the basis of such research I doubted they were immune to this phenomenon, nor I, even if we tripped across child pornography.

OK, hands up to this one. For a journalist like me with thirty years experience it was naÃ¯ve. If the Mail on Sunday hadnât just whipped up a firestorm about me it might have been fine. But the news media canât resist a shocking headline, especially when offered on a plate. The Telegraph promptly reported, âNick Ross would watch child pornographyâ, and the rest of the press leapt joyfully in, including supposedly thoughtful papers like the Independent.

Some of itâs still there, and will be there for ever, on the Internet. I have joined the swelling ranks of women as well as men, including others far more distinguished, who have been pilloried for saying what, with time to reflect and see the evidence, most people would agree with.